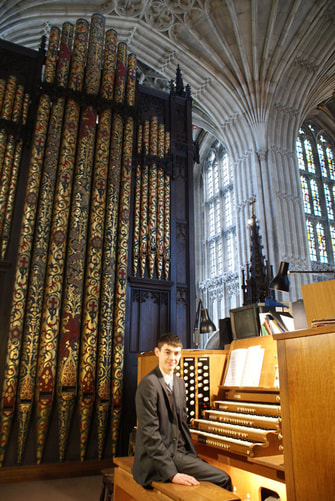 ©The Dean & Canons of Windsor.
Biography​​


Ben Bloor is the Organist of the London Oratory Church where he accompanies the professional adult choir for weekly Mass and Vespers and oversees the famous Downes/Walker organ. He combines this with a busy freelance recital career and the post of School Organist at Westminster School, where he teaches organ and plays for services in Westminster Abbey. Previously, he held organ scholarships at Derby Cathedral, St George’s Chapel Windsor Castle, New College Oxford and Westminster Cathedral, and was the Assistant Sub-Organist at Rochester Cathedral. Ben was the winner of the 2012 Northern Ireland International Organ Competition, and a semi-finalist in the inaugural Wadden Sea International Organ Competition held in Denmark in January 2017. He was awarded second prize in the Boston Bach International Organ Competition 2018. Ben holds a First-Class Honours degree in Music from the University of Oxford and the Limpus prize for highest marks in the 2013 FRCO examinations. He is a recipient of the Worshipful Company of Musicians’ Silver Medal for his contribution to organ-playing. Ben is a Junior Fellow of the Royal Birmingham Conservatoire where he takes organ lessons with Henry Fairs.